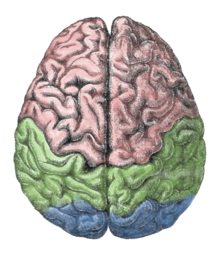 You’ve heard about the very simplistic idea of how people can be either left brained or right brained.  The lateralization of brain function is an interesting study.  I don’t claim to be a neuroscientist at all.  I am fascinated by the information though.

There are a few things that scientist agree on.  One, we know very little about the brain.  Two, even though we talk about people being left or right brained – no one is truly only left or right brain.  Our brains work in tandem, and although you might have a preference in your personality with one side or the other, no one is just on the one side.  The longitudinal split between the left and right hemispheres of the brain are connected by the corpus callosum – which is thicker in women.  That is probably the reason why women are better at multi-tasking than men are.  Even though we know all of this and at the same time hardly know anything about it, there was this interesting thing that I heard in light of these ideas.

Right brained people – or typically the creative and more emotional side have the ability to think and process and move in the left hemisphere of their brain.  It’s pretty straightforward there anyway, and the Right can go Left.

Left brained people – or typically the logical and focused on detail types of thinkers have a harder time going to the right side of the brain.  It’s scary.  It’s emotional.  It’s not precise.  I don’t think they were saying that Left can’t ever go Right.  I think it’s just harder for them to go that way than for the others to come left.

Even though we don’t know much about the lateralization of the brain and this might be too simplistic to process through this, it’s still an interesting idea.  Left can’t go Right.

Depending on which side you have a tendency to think on, you’ll respond accordingly.