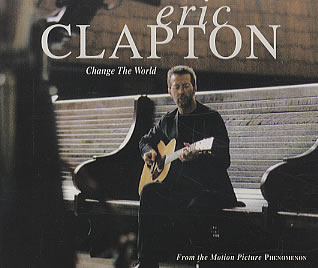 I see it alot.  There are tons of places that want to change the world.  I just graduated, and the phrase was all over the place.  I didn’t even know that it was a phrase that they were using.

Now, I totally get it.  I’ve talked about changing the world.  I think I know what people mean when they say that they want to Change the World.

There are those that are happy in their world.  They don’t want to change the world because they know their place in it.

Now, there is alot of nuance to the phrase Change the World.  There are tons of great reasons to Change the World.  I just wanted to highlight that one of them is born out of selfishness and insecurity.  It will all look the same on the outside, but your motivation says alot about who you are.

Now, it’s time to listen to Eric Clapton sing about it.  (I don’t think Eric is singing about the changing the world that I just wrote about).